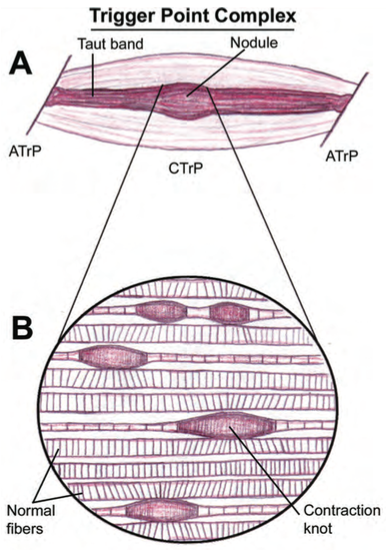 Trigger point dry needling, also known as intra- muscular stimulation, is a technique using a solid filament needle to treat hyperirritable spots of the skeletal muscle. These hyperirritable spots are called trigger points and are typically associated with palpable nodules in taut bands of tissue. (Figure 1) Physical therapists insert a dry needle, without medication or injection, in trigger points to treat myofascial pain.1

As far back as the 16th century, myofascial pain syndromes have been recognized by medical practitioners as causing sensory, motor, and autonomic symptoms and dysfunctions. Myofascial pain syndromes are associated with the palpable nodules or taut bands known as myofascial trigger points. Dr. Janet Travell is recognized for bringing attention to myofascial trigger points in the mid 1900’s. Dr. Travell started her medical career in cardiology and later shifted to musculoskeletal conditions due to her interest in muscle pain and the impact of referred pain on patient’s dysfunction. Myofascial origin of pain was discovered through an injection of hypertonic saline into trigger points which produced referred pain patterns. Initially, injection of an analgesic medication into the trigger points produced a decrease in a patient’s symptoms, pain, and the sensitivity to touch of the trigger points.2 After further research, it was discovered that the actual insertion and stimulation of the muscle with a dry needle produced pain relief without the need for medication. Thus, the development of trigger point dry needling began. (Figure 2)

The perpetuating factors of myofascial pain syndromes are low level musculature contraction, unaccustomed eccentric contraction, muscle overloads, and muscle fatigue. These factors can be caused by, but not limited to, mechanical dysfunctions such as forward head postures, joint hypermobilities, ergonomic stressors, poor body mechanics, and scoliosis. 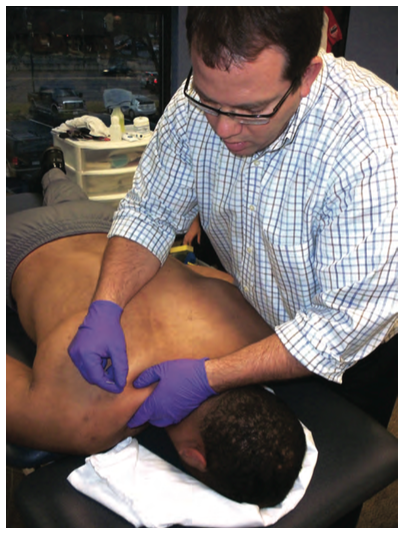 Dry needling techniques are developed on various models, which are implemented in physical therapy practices on a daily basis. Dr. Chan Gunn contributed to the development of dry needling and introduced the term intramuscular stimulation (IMS), in which he de- scribed that myofascial pain syndromes are a result of radiculopathy or peripheral neuropathy, causing a dis- ordered function of the peripheral nerve. This concept is referred to as the radiculopathy model and is based on the Cannon and Rosenblueth’s law of denervation, which states that free flow of nerve impulses maintains innervated function and integrity of structures. When any neural flow is disrupted, all the structures that are innervated by that nerve, such as skeletal muscle, smooth muscle, spinal neurons, sympathetic ganglia, and sweat glands, are affected and can become atro- phic, highly irritable, and hypersensitive. The trigger point model describes myofascial trigger points con- sisting of taut musculature bands due to the excessive release of acetylcholine. Myofascial trigger points are classified as active or latent. Active myofascial trig- ger points can cause local and referred pain, or other parasthesias, whereas latent myofascial trigger points may not produce pain without being stimulated. Ac- tive myofascial trigger points typically refer pain to a particular site, and these sites are not restricted to a single segmental or peripheral nerve distribution. Clinically, myofascial trigger points can cause motor dysfunction or muscle weakness as a result of motor inhibition, restricted motion, and muscular stiffness. Furthermore, sensory dysfunctions may be noted through localized tenderness, referral of pain to specific areas, hyperalgesia (extreme pain reaction to a painful stimulus), and/or allodynia (pain reaction to a non-painful stimulus). 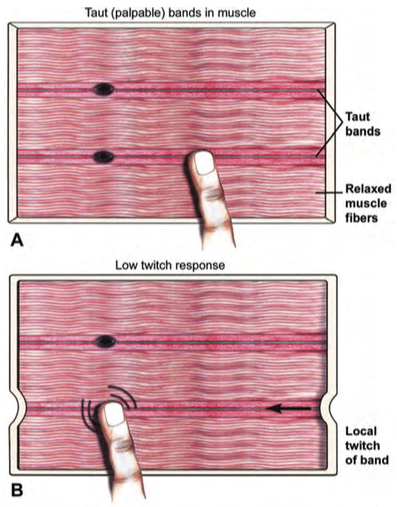 The goal of the insertion of a fine filament needle into a trigger point is to produce a twitch response (short contraction) of the muscle being needled. The twitch of the muscle is the desired response; how- ever, benefits can occur even without a twitch of the muscle. The simple insertion of the needle into the taut bands can interrupt the pathogenic process and produce mechanical changes in the tissue. (Figure 3) The insertion of a needle into the trigger point can produce a deep ache or cramping pressure that lasts only briefly. Reproduction of pain and referral of symptoms may also occur, and soreness may last up to 24–48 hours. Improvements in functional range of motion, decrease in complaints of pain, and ease of mobility may be seen after treatment.

Dry needling allows access to deep musculature that may never have been reached without the use of a needle. By releasing the myofascial restrictions through trigger point dry needling, a physical therapist is able to further enhance a patients care and return to function. Trigger point dry needling can disrupt the neurological feedback loop eliciting pain in the mus- culoskeletal system.

Myofascial trigger point dry needling has no simi- larities with traditional acupuncture except for the tool being used during the process.3 Traditionally, acu- puncture is based upon Chinese medicine that seeks to regulate flow and stability of energy through sub- cutaneous placements of needles. Acupuncture points are points mainly along the paths of energy flow (or meridians). In contrast, trigger point dry needles are inserted into specific musculature, targeting tight muscles, and based on neuromuscular and biomechanical principles.